Everglade Windows has been named Fabricator / Manufacturer of the year in the 2017 National Fenestration Awards (NFAs). 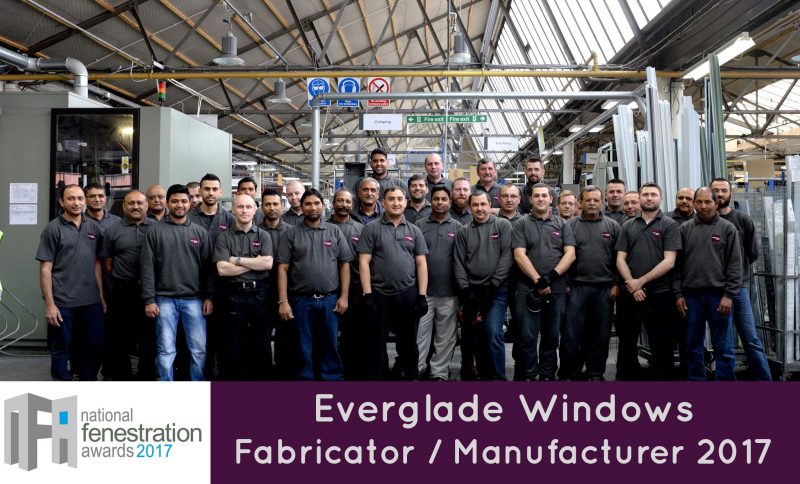 There was fierce competition in our category. We were nominated alongside 23 other window fabricators, including some of the biggest names in the glazing industry, so this is a really significant win. We were awarded the title after receiving almost 20 percent of the vote.

The NFAs are different to other awards, because they are voted for by our peers, customers and friends in the industry, who have regular dealings with the whole team and really understand how we operate as a business.

That’s why we are so pleased to have been given this NFA title on day 3 of Winners’ Week. It’s a credit to the whole team at Everglade Windows. We’re really looking forward to celebrating with the other NFA winners at the Winners’ Event in 2018.

Other Awards and Accolades in 2017

This win rounds off a great year of accolades that Everglade Windows has received this year. We were on the shortlist for the G Award for Customer Care Initiative of the Year. It’s one of the biggest award events in the glazing industry diary and the customer care initiative category is a notoriously tough category.

We were also recently named a double finalist at the West London Business Awards for the second year running. We’re shortlisted in two separate categories – Manufacturing and Engineering Company of the year and SME of the Year and the winner will be announced in February 2018.

A leading industry report also named us as the number one fabricator in London, listing us in the top 75 fabricators in the UK.

2017 has been a fantastic year at Everglade. We’ve held some great events, including our best-ever annual customer conference and featured at FIT Show 2017 – our first time exhibiting at the show. We’re looking forward to an equally successful 2018 for us and all of our fantastic customers.

If you’re not working with Everglade Windows yet, but would like to start working with London’s best window manufacturer, get in touch with our sales support team today.